This is a great short video from two people I highly respect. Marty Kendall from Optimising Nutrition and Ted Naiman, creator of the P:E diet.

In this video, they describe the worst macro combination for fat loss and why it makes us hyperphagic (tendency to gorge).

Ted give’s Don’t Eat for Winter a huge plug during the video, which I very much appreciate.

“A huge shout out to Foley, and his book, Don’t Eat for Winter. I mean nobody has done a better job describing this than he has. He needs a lot more credit than he gets for sure!” – Ted Naiman

Cian Foley is a Software Engineer from Waterford, Ireland and also a 2 time European, pan-American and World amateur kettlebell champion. Cian was a 115kg (256lb) obese 35 year old and has completely transformed into to a fit and healthy 78kg athlete through his 8 year journey of discovery around nutrition and exercise. He now competes as a natural bodybuilder at the age of 43 to prove that it is never too late to get into great shape without the use of steroids.

Latest posts by Cian (see all) 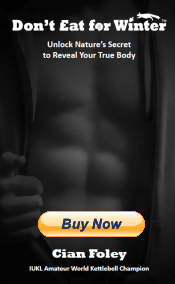